“Haruka” is an oyster brand that is safe and rich in flavor. To meet the demand of consumers such as making oysters almost equal size and weight, we have renewed our production method. The single seed farming realizes production of beautiful shells and fat oyster meat.

1. Nursery
We feed phytoplankton to oyster larvae in a ton of water tank. The larvae develop a part like sucker after a month, and we place a resin disc called “trail” as a culch inside the tank. Then the larvae get attached with the disc.

Usually scallop shells are used as the culch because they are easy to get. For each “Haruka” oyster to be well-fed, however, we use the trail, or resin disc, so that each larva tends to be independent. Using this method makes it easier to remove young shells from the culch, which is how we produce “Haruka”, the single seed oyster. Its beautiful appearance contributes to the world-class premium quality of “Haruka.” 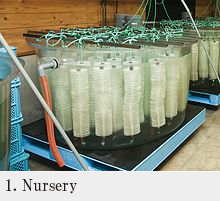 2. Seawater souse
The trails are soused in seawater to remove pests. (Twice during the farming) 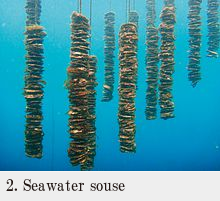 3. Micro bubble exposure
The oysters are exposed to micro bubbles in the sea to prevent contamination. (Three times a week, total of 18 hours)
Minus-charged micro bubbles get attached with unwanted bacteria and substance on the oysters and the bubbles takes them away from the oysters. 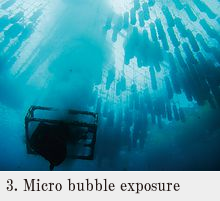 4. Removing young oysters
Young oysters are removed from the trail by vibration. 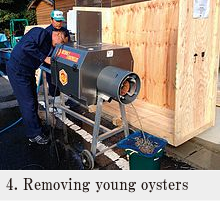 5&6 Farming in a basket
To make oysters to prey on more phytoplankton, different baskets are used as oysters grow. 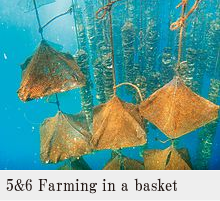 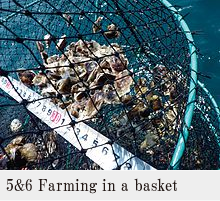 7. Attached by Kaidelight®
Three oysters are attached to a rope using Kaidelight®, a cement-based adhesive invented specifically for oyster farming.

The usual hanging method used for oyster farming is that first making a small hole on a shell and hanging the shell to a rope using guts. It is difficult to make each oyster be evenly fed, which sometimes ends up that only some oysters grow big while others are small. Especially for open sea cultivation where less phytoplankton exist, it is concerned that some oysters do not grow big enough.

So we adopted attachment method using Kaidelight®. Instead of hanging oysters to the rope, we attach them using the special adhesive. Evenly attached oysters grow better, and compared with hanging method, the attachment method improved the growth of oysters 10% to 20%. Kaidelight® was invented specifically for oyster farming, so it does not have any bad effect on oysters. 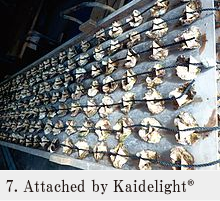 8. Kaidelight® attachment culture
After oysters get attached by Kaidelight®, they spend three years in open ocean to grow up slowly. 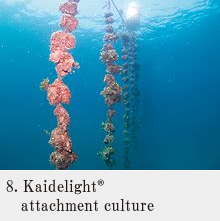